The game will be on a couple-week hiatus, so here is a behind the screen look at the terrain ahead.

Maks and crew will be heading west in their train shortly, assuming they escape Kalisz successfully. I’ve been assembling the Twilight 2000 Poland and Germany maps, and placing military units as listed in the lists on pages 13-18 of the adventure sourcebook Going Home.

The module of course assigns the party one last mission in Europe: Evacuation!

The NATO and Warsaw Pact divisions are shown “in their winter quarters as of October, 2000“. [GH, page 2] But with the large unit lists for both sides, unless you have close knowledge of northern European geography, the strategic situation can be unclear.

In preparation of the party heading west, I plotted most of the units on my online combined Poland/Germany color maps from the game. Some areas of interest caught my eye, and changed how I viewed the post-war situation in Northern Europe. I’ll start in Poland, and make my way westward to Bremerhaven, Germany in the next post or two.

By River, and By Sea

My brother had contemplated taking the tug Wisla Krolowa (from Pirates of the Vistula) downriver from Warsaw to the Polish coast, and then west along the coast to Bremerhaven. But it’s not clear how the river tug would handle the open ocean. And then there’s the problem of Denmark being in the way. Ultimately, he ruled out the boat plan.

But what if he had taken the Vistula river route? Initially, the biggest headache would be the heavy Soviet presence in Torun on the river. Once in open ocean, most of the coastline-hugging would be in territory controlled by independent Polish units. Shouldn’t be too much trouble. 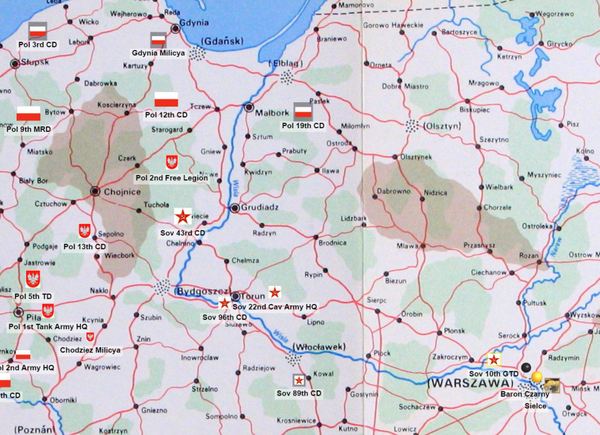 The XI US Corps

And then they’d run into the Americans on the Polish coast. These units are what’s left of the XI US Corps, noted as having “remained in its positions out of necessity rather than by choice.” [GH, page 13]

These units are the remnant of last summer’s NATO offensive. [See “Player Briefing” at the end of the post.]

There has been surprisingly little change in unit locations since summer, including the NATO divisions on the coast. Everybody’s for the most part tightening up their perimeters for winter.

In the summer offensive, the 11th Corps broke through the lines along the weakly-defended Polish coast. It was from here the the US 5th Division (Mechanized) jumped south on its raid deep in the Warsaw Pact rear areas. And then everything fell apart when the Warsaw Pact counter-attacked with surprising speed and mobility.

So the US 11th Corps is still there on the coast months later. Going Home states:

“As of the beginning of the adventure, word of the evacuation has just arrived. Most of the Corps’ personnel will decide to remain in place rather than risk the journey to Bremerhaven.”

Looking west, there are no Warsaw Pact divisions between 11th Corps and Bremerhaven. It may seem strange that no faction claims the area, but this part of East Germany was sparsely-populated – with the notable exception of Berlin of course – before the war.

This begs the question: Why don’t they go home? It could of course have been an oversight on the part of GDW, but that’s no fun. So, in our game, why doesn’t 11th Corps head for Bremerhaven?

The bridges at the mouth of the Oder are out, forcing any travel south into the Soviet-controlled territory? The Americans don’t know the situation to the west? Unable to stockpile ethanol over the summer? Leadership lacks the courage to mount the expedition? Unwilling to abandon the personnel of the lost 5th and 8th Divisions?

EDIT: After writing this last paragraph, I went to go look up this question online on the Juhlin forum. And there were some posts.

“Legbreaker” wrote about the NATO offensive and aftermath.

And user “Adm.Lee” has an interesting take.

But in our campaign, alas, the 11th Corps won’t make an appearance. I doubt my brother will head far north as the party is very short on time, and will take the most direct rail route available to Bremerhaven.

In the spring of the year 2000, the German 3rd Army launched its final offensive against Poland. It was postponed due to late rains — the soldiers were delayed in getting their fields planted.

The objective of the offensive was to clear the Baltic coast of Polish and Soviet forces, thus gaining control of the plentiful Baltic fishing resources and the Vistula River barge traffic.

When the offensive finally got under way it was spearheaded by the U.S. 11th Corps because the U.S. troops were less tied to their cantonments than were the Germans. You are members of the United States 5th Infantry Division (Mechanized), one of the component units of the 11th Corps.

The initial drives were successful, with two U.S. divisions breaking loose and conducting deep-penetration raids into the enemy rear area.

The last battle-worthy remnants of the Polish Army counterattacked, and battered themselves to pieces against the forward German and U.S. divisions. When the dust had settled, the last heavy equipment of 11th Corps’ main body was burning junk. The remnants of four Soviet armies went on the offensive against the cantonments of the 3rd German Army, and German troops began drifting westward to bolster the defense of their homes.

Finally, two additional Soviet armies, the 4th Guards Tank and 22nd Cavalry, rolled across the Polish frontier from Byelorussia and hit the U.S. 5th Division. With a combined strength of 21,000 men and almost 100 modern tanks, the two Soviet armies plowed 5th Division under near the Polish city of Kalisz, 200 kilometers southwest of the ruins of Warsaw.

As division headquarters was being overrun, the CO’s last radio message to you was, ‘You’re on your own. Good luck.”

Links to DriveThruRPG, as always, are affiliate links. Toss a few coins in my tip jar; costs you nothing extra.

BATTLETECH is a blast ’em and smash ’em game of giant piloted Mechs that dates back to the original edition of Battledroids (FASA, 1984). There’s a whole campaign universe centered around ongoing warring of feuding factions and personalities. It was only a matter of time before gladiator combat was introduced to the Battletech universe in […] 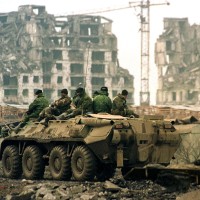 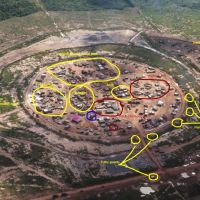 The Central Front: Command And Control On The Nuclear Battlefield D+24 (2 August, 1987) Part I

In the battlefield nuclear exchanges that took place early on D+24, command and control elements and links were among the earliest casualties in both the NATO and Soviet formations that were targeted. This occurrence was anything but a surprise. Both sides had anticipated and prepared for the eventuality. Contingency plans for combat operations in a […]